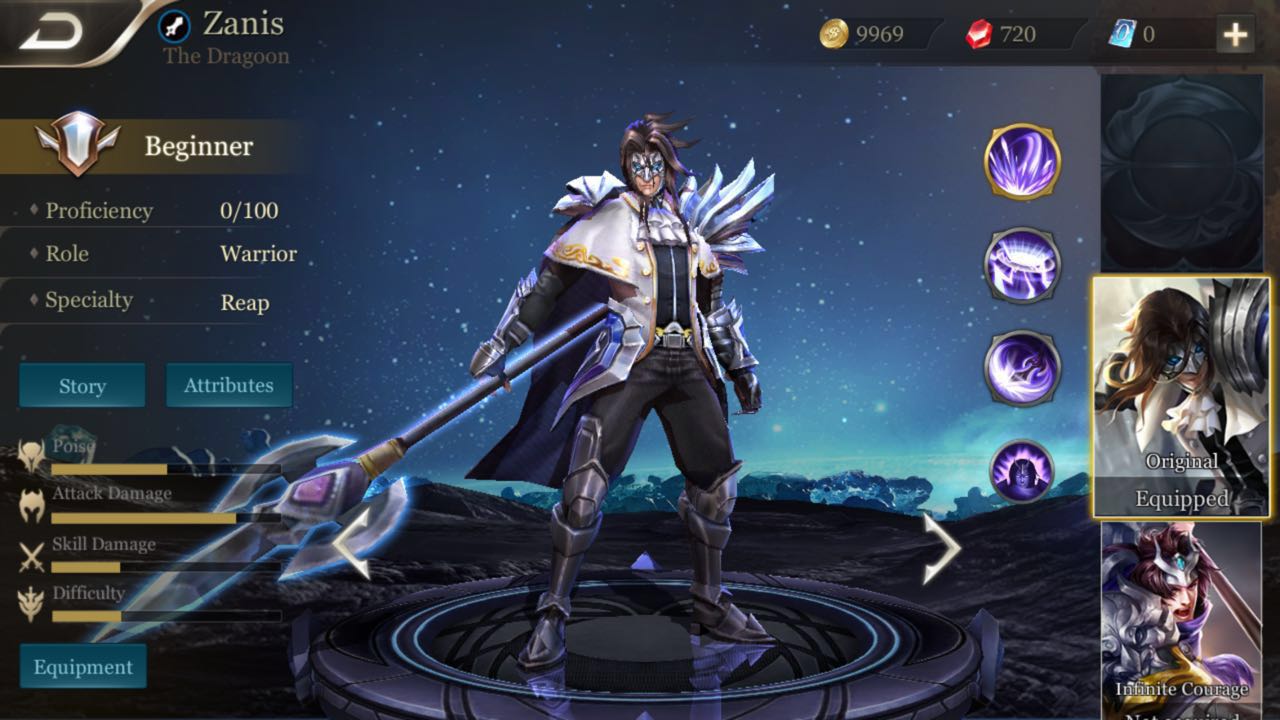 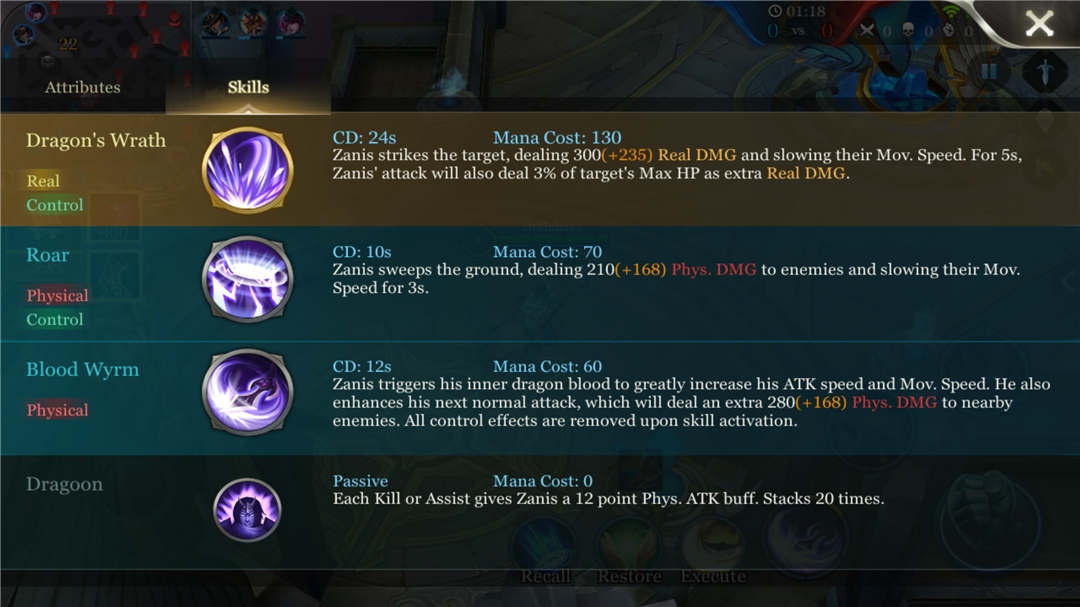 Zanis' Dragoon is like having an item that constantly increases Attack. Each kill or assist gives him an Attack buff. Even without an attack build, a Zanis with 20 passive stacks deals a ton of damage. Blood Wyrm can increase Attack and Movement Speed after being used. The most important thing is that it clears him from impairing effects, which is very useful in team battles. Roar is a ranged skill that decreases enemy Speed. It's most effective in team battles and when chasing enemies. His Ultimate deals true damage and decreases enemy movement speed. It really packs a punch in team battles.

Execute: With its true damage, finishing off enemies is a breeze. It's always a worry that you won't completely kill enemies in team battles, and that they'll get away just in time. But with Execute, those worries are gone. 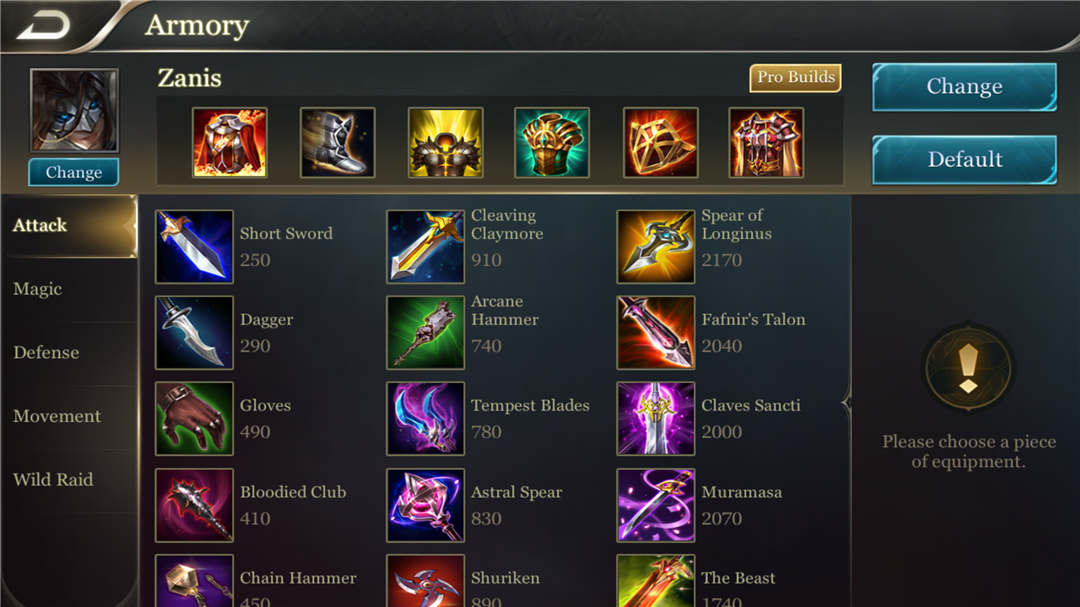 Item Analysis: Mantle of Ra increases endurance. Its passive is also useful, since Zanis likes to penetrate enemy bases. Mail of Pain can increase his armor, and its passive reflects damage. It's a perfect match for his Ultimate. Even against tanks, he will be able to do great damage. Gaia's Standard can increase his HP and Magic Defense. Its passive gives him near endless amounts of HP. The Aegis prevents him from getting kited by archer Heroes. It also decreases the normal attack damage of enemy Heroes. Crimson Banner increases HP, which makes Zanis nigh invincible. It can restore HP while you get kills and assists in team fights. 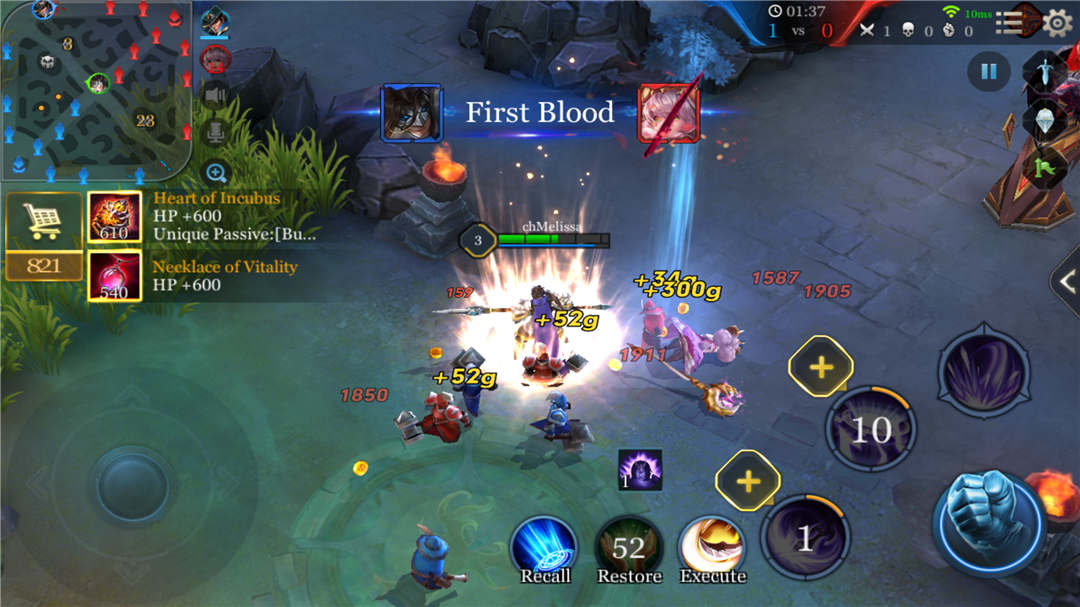 When in a group battle, fire up Zanis' Ultimate first to crowd control. Then destroy everyone when his attack speed is boosted. Use the Ultimate in team battles for crowd control first, then use his increased attack to quickly kill enemies.

It's important to level up as quickly as possible in the beginning, since Zanis is neither a carry nor a tank before Level 4. Level up, then gank after reaching Level 4. Support teammates and kill enemies. He can dominate skirmishes after Level 4, so pay attention to timing. Use his Ultimate in late game team battles. Decrease enemy speed and then hunt them down. Don't underestimate his late game Attack power either. A well placed Ultimate deals true damage and can catch enemies with their pants down.