Arena Valor is getting an official server update on July 16, and we're bringing changes to hero balance, pre-match building and battlefield mechanics. We're hoping that these changes will make matches even more dynamic and balanced for a better playing experience.

A new chapter has begun! The dark lord has returned, threatening to engulf the world in darkness. Andura crystals appear in masse from the ground, and the forces of light have been driven to the brink. As the world of Athanor changes, we have taken another step forward with our visual design, and introducing the new Enchantment system for an even richer gaming experience. 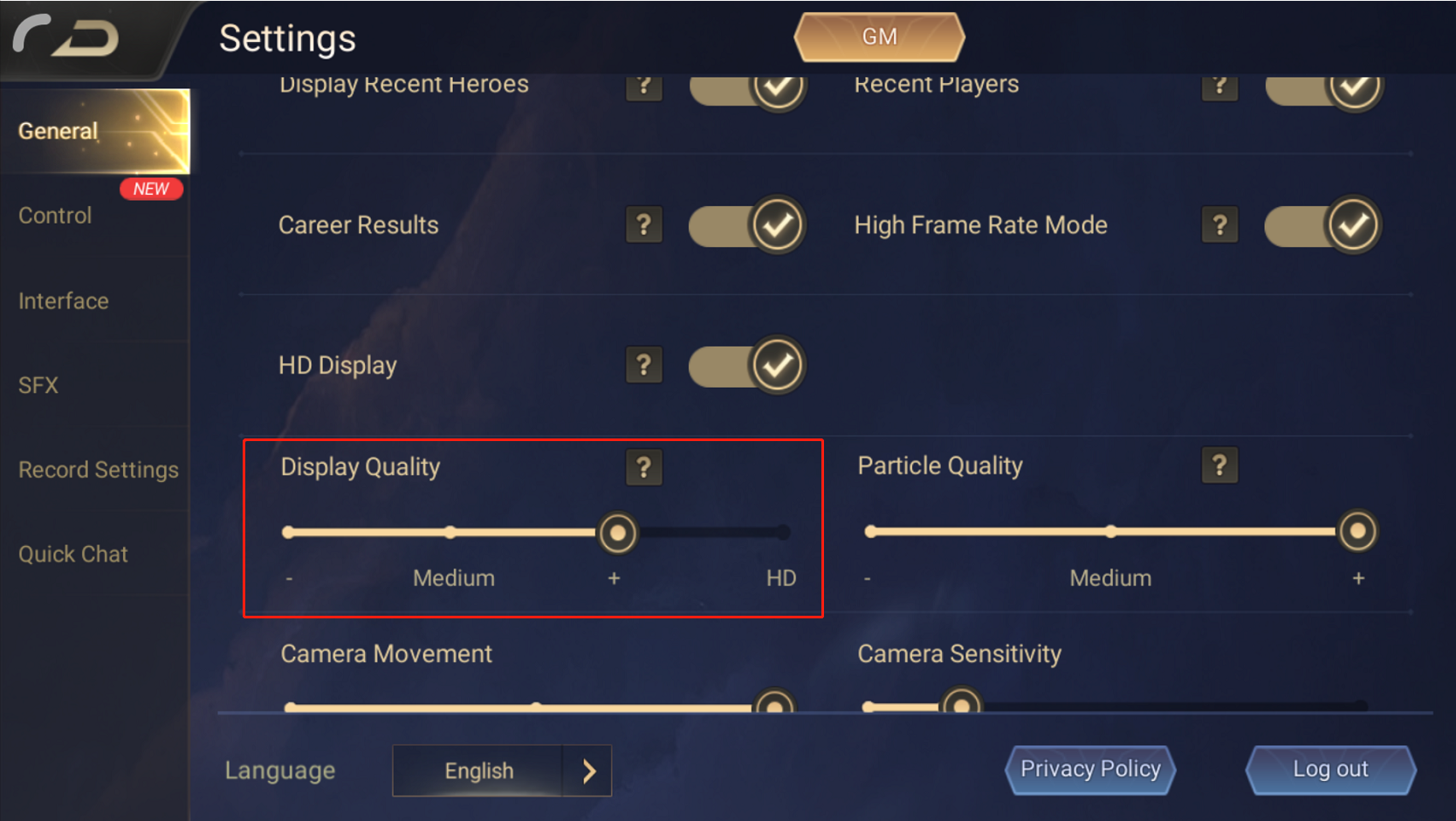 A refreshed interfaced with a brand new logo and color combinations for a simple and clear layout that is both attractive and practical.

The return of Volkath has caused an explosive growth in Andura crystals. Opportunistic mages are now harnessing its energy to create Enchantments with various effects.

The new Enchantment system delivers a brand-new experience and increased strategic depth, for an even richer and more dynamic gaming experience.

There are 4 Enchantment masteries, corresponding to the four major factions of Athanor: Lokheim, Veda, Afata and League of Humans.

Enchantments can improve heroes' abilities. Set them up outside of matches and use their skills in matches. 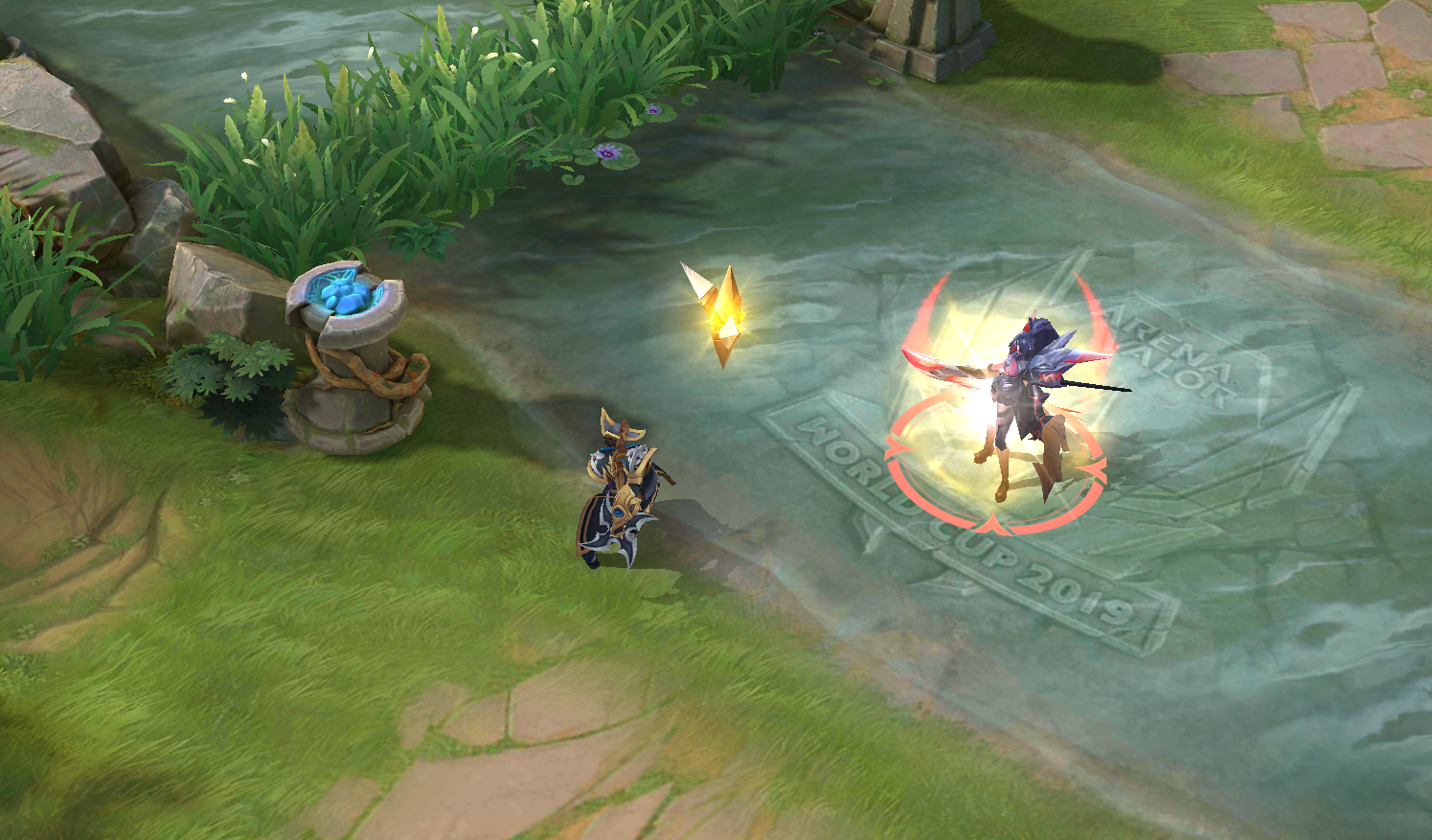 Each Enchantment has 5 skill slots on its Page.

Pages are bound to their hero. Each hero has 3 Pages. Configure Pages outside matches and choose the page to use as you choose your hero. 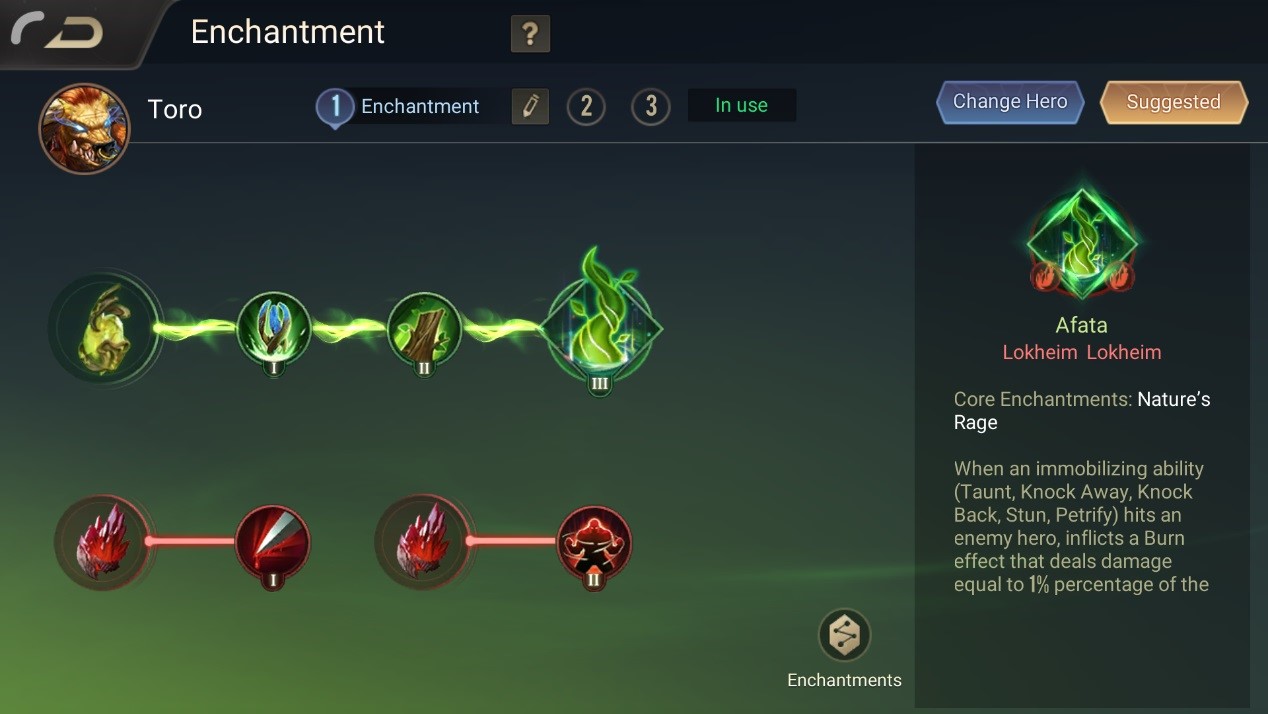 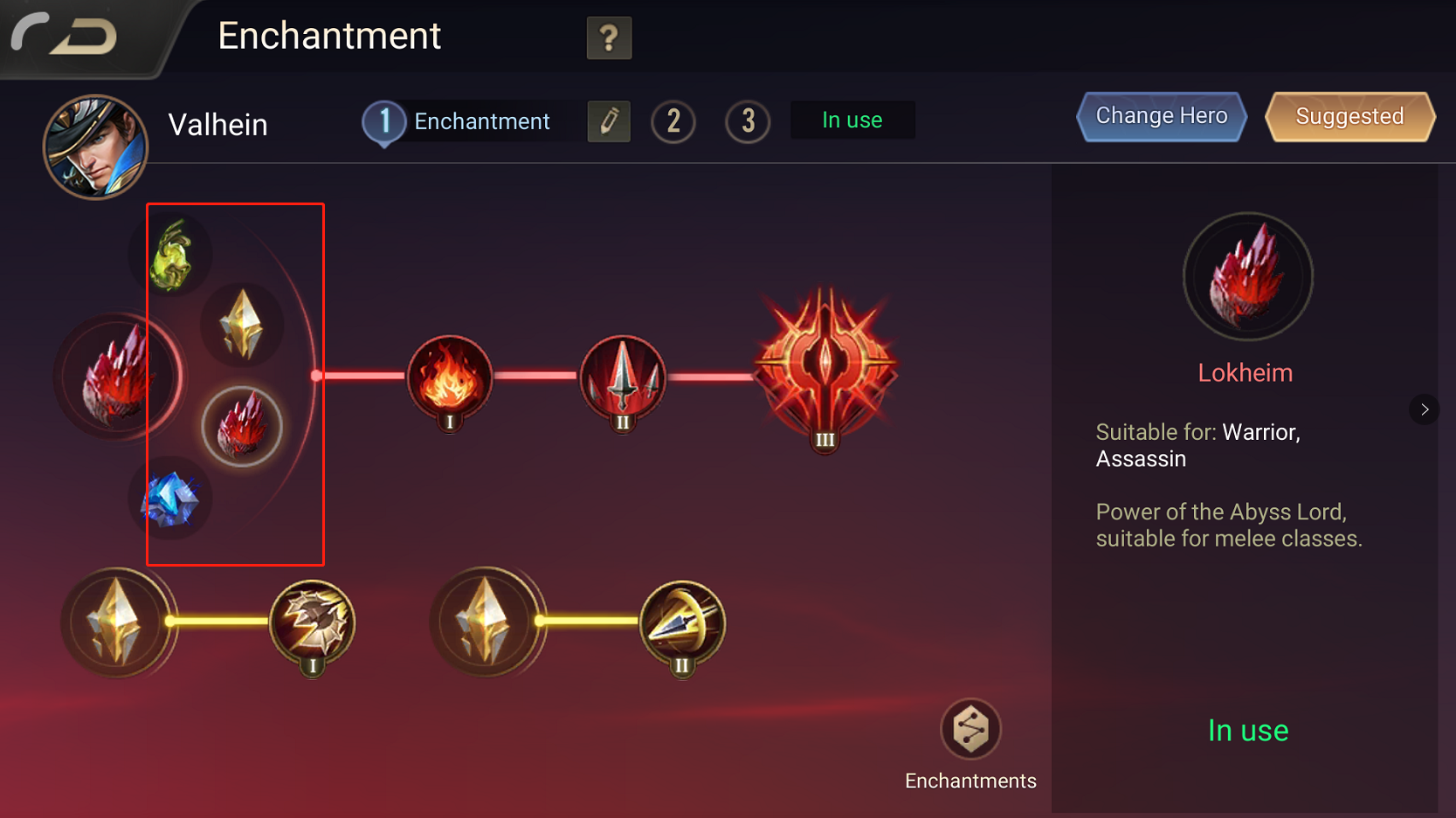 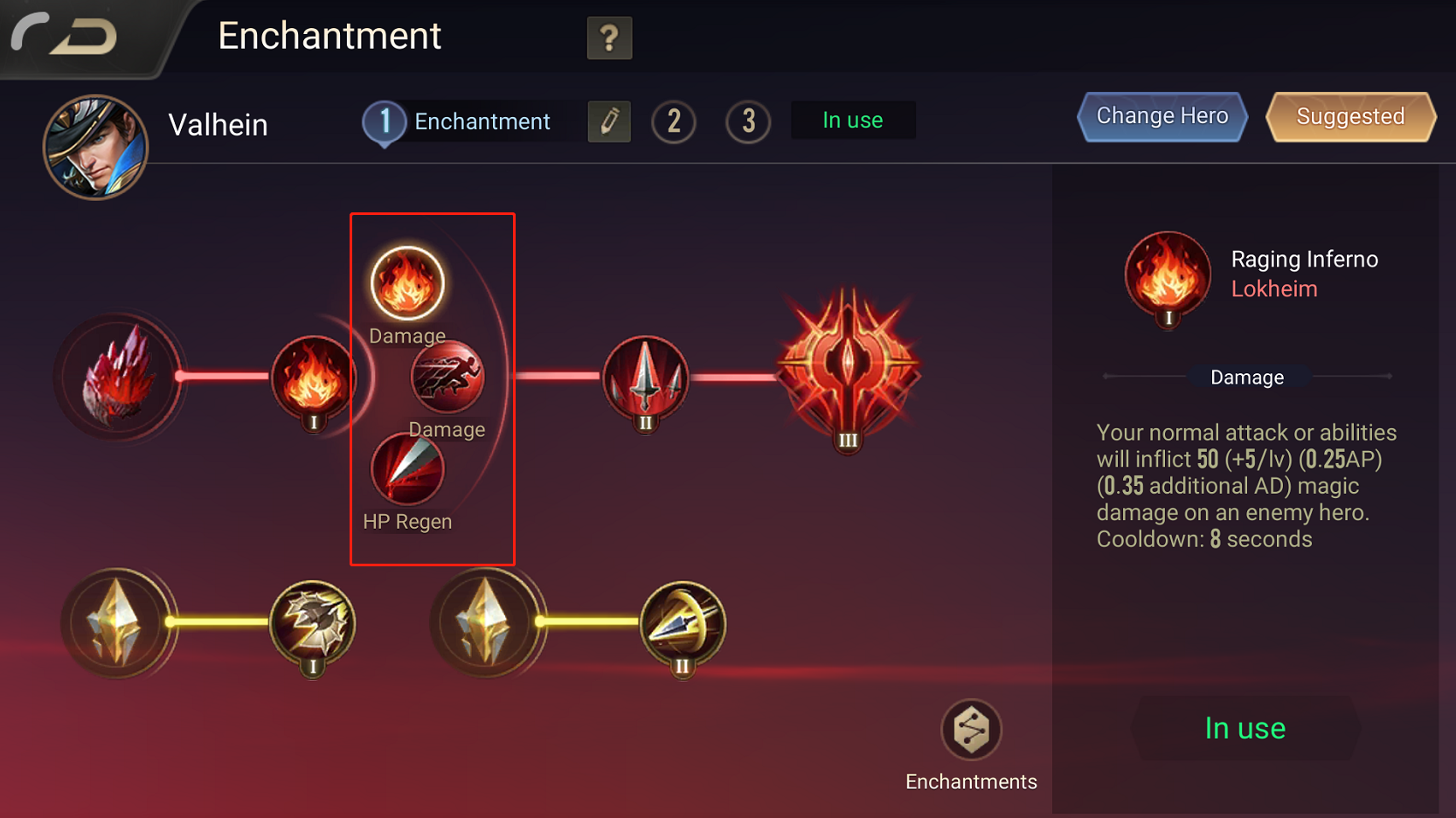 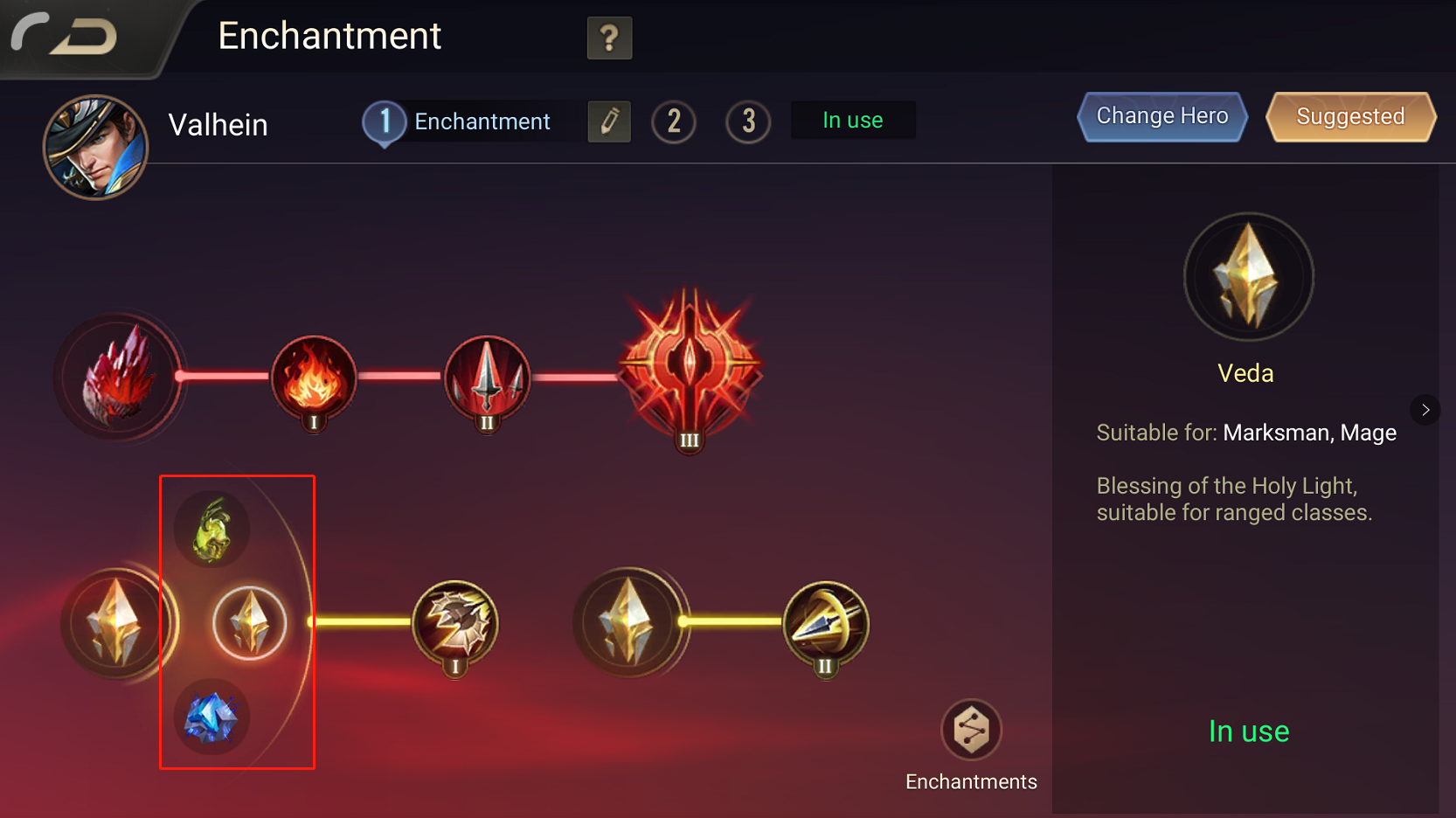 1. Unified naming system with no change in attributes

All Arcana slots are unlocked when the feature is unlocked at Lv.7. They are no longer unlocked one by one. 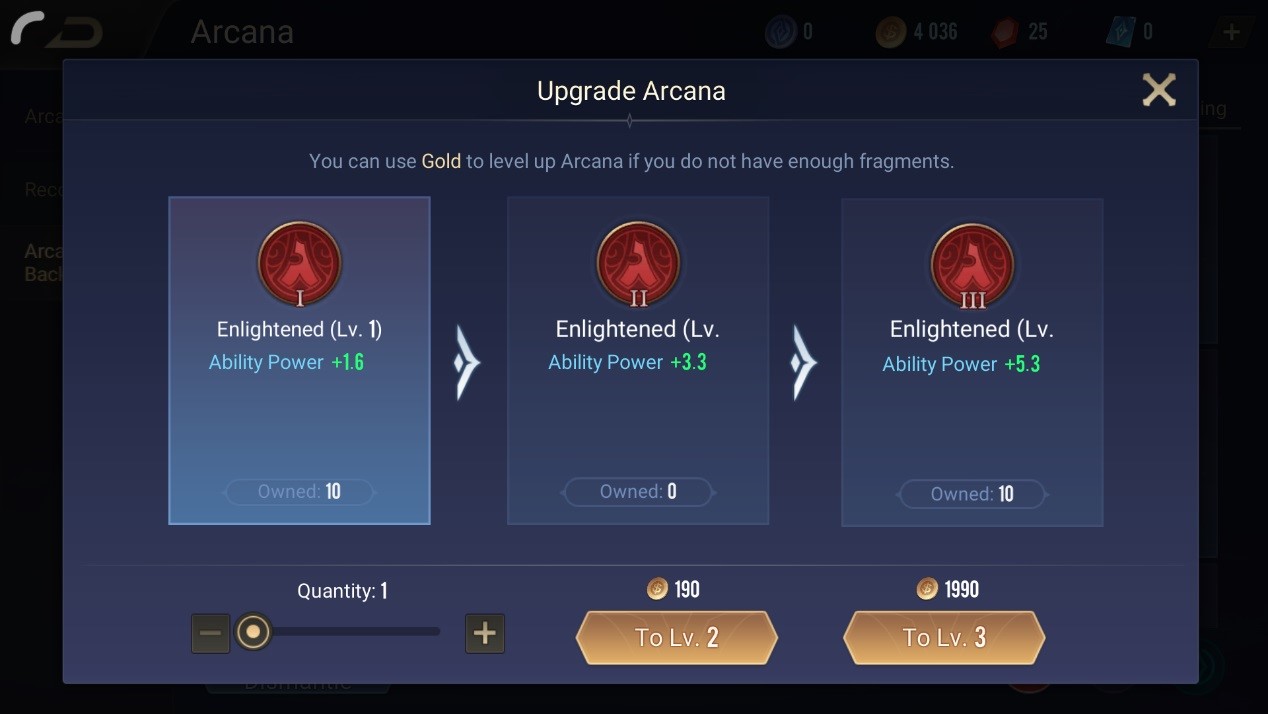 4. Dismantle and reset unneeded Arcana to get Arcana Fragments

Arcana is no longer sold for Gold. You can equip up to 10 Arcana of the same name at a time across Lv. 1/Lv. 2/Lv. 3 in total. Excess Arcana can now be dismantled into Arcana Fragments at a lesser loss.

You can also reset excess Arcana from Lv. 2/Lv. 3 back to Lv. 1, which returns the same amount of Arcana Fragments as dismantling. 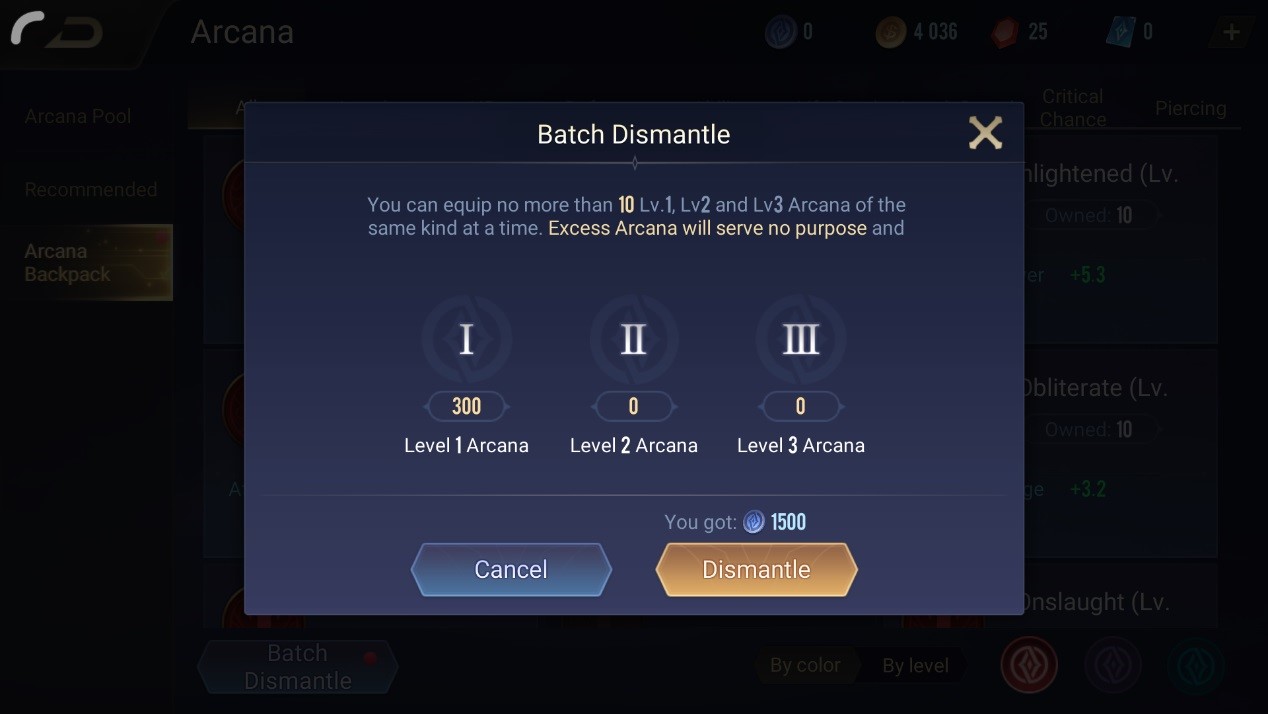 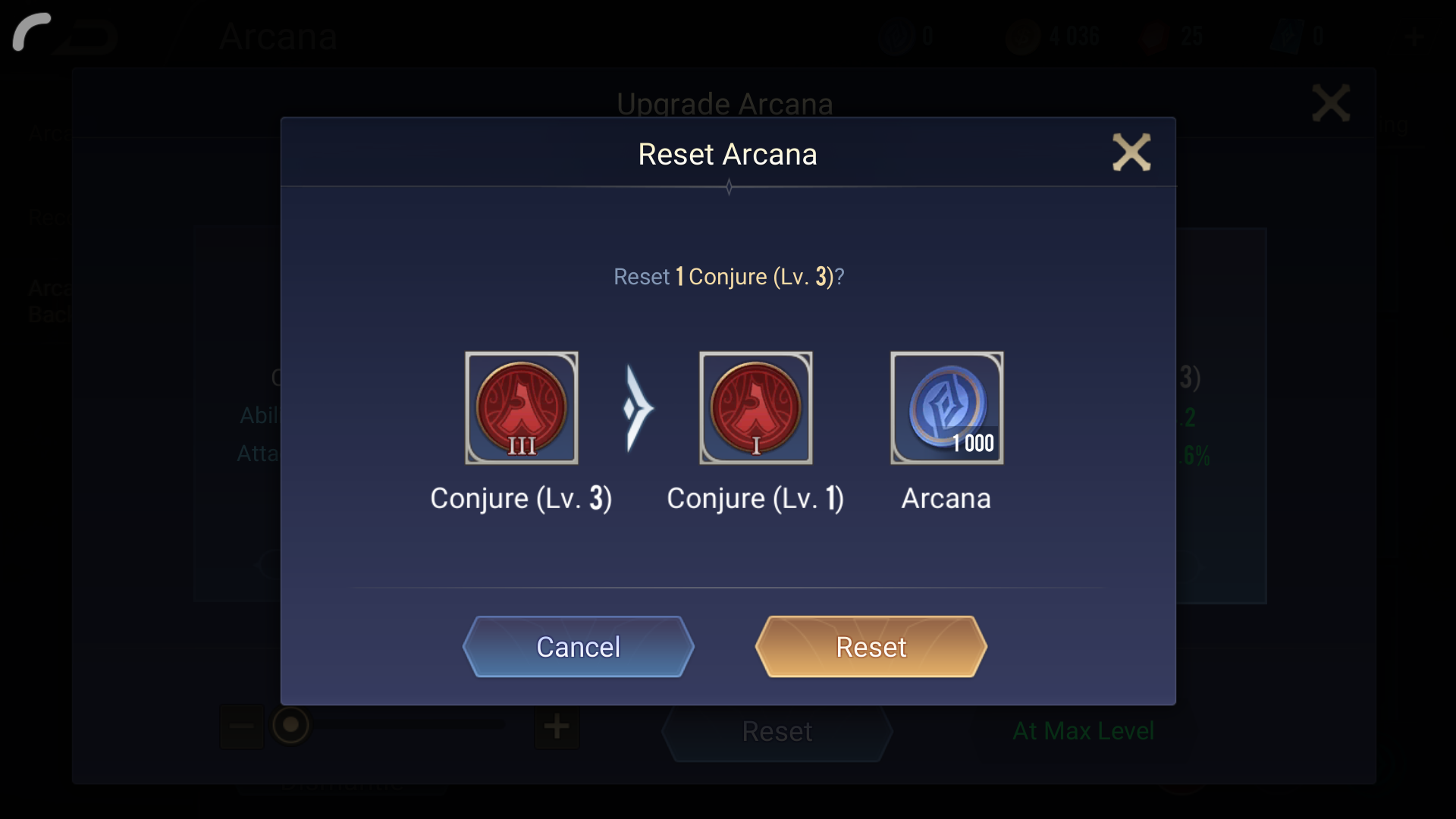 8 common Arcana builds will be preset to corresponding heroes. When you use the hero for the first time, you can choose the default recommended preset for the hero. 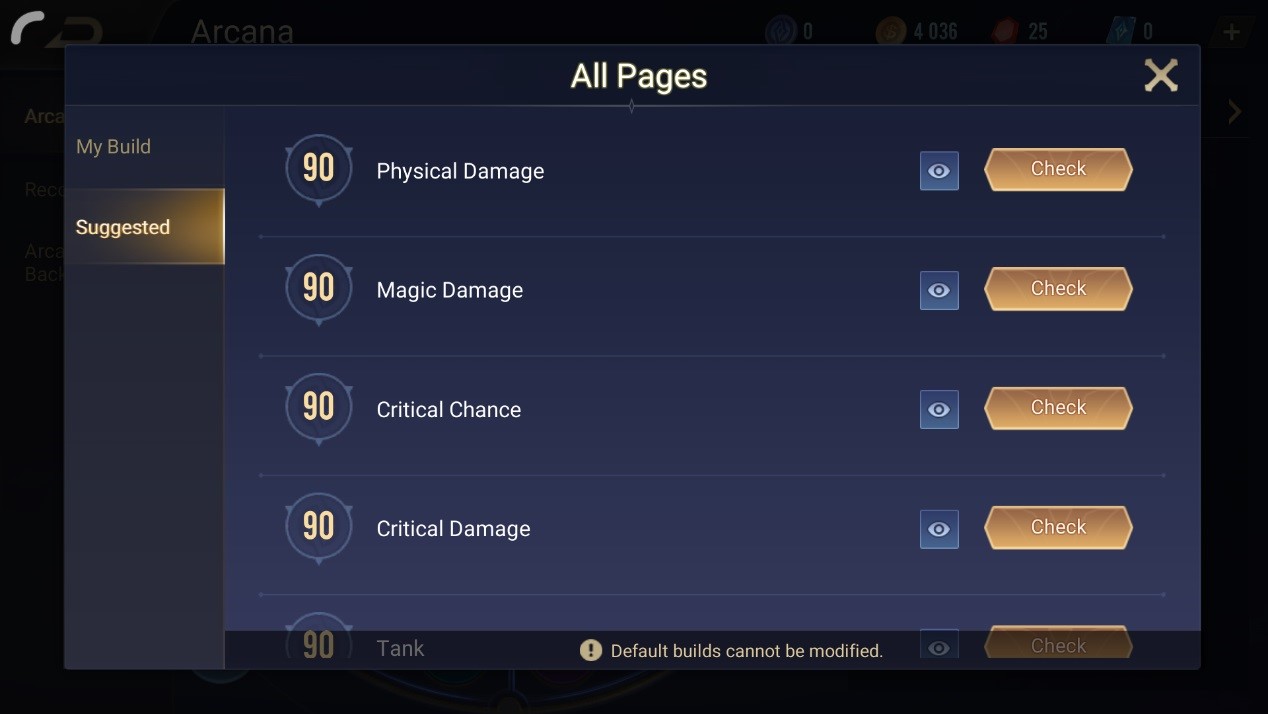 6. Copy Top Player and Popular Arcana builds with one click

View builds from the top players and popular builds among highly ranked players, and copy them with a tap to your own Arcana page to automatically select the highest level Arcana available to you.

Placement match algorithm has been tweaked so that your results in a new season's placement match is more accurately reflected in your rank placement. We will continue to improve star rewards in placement matches. Additional stars are awarded or penalized based on range of classes used, MVPs, AFK or reported dishonest behavior.

S11 is about to start, introducing a new tier "Veteran". Rank carry-over details as follows: 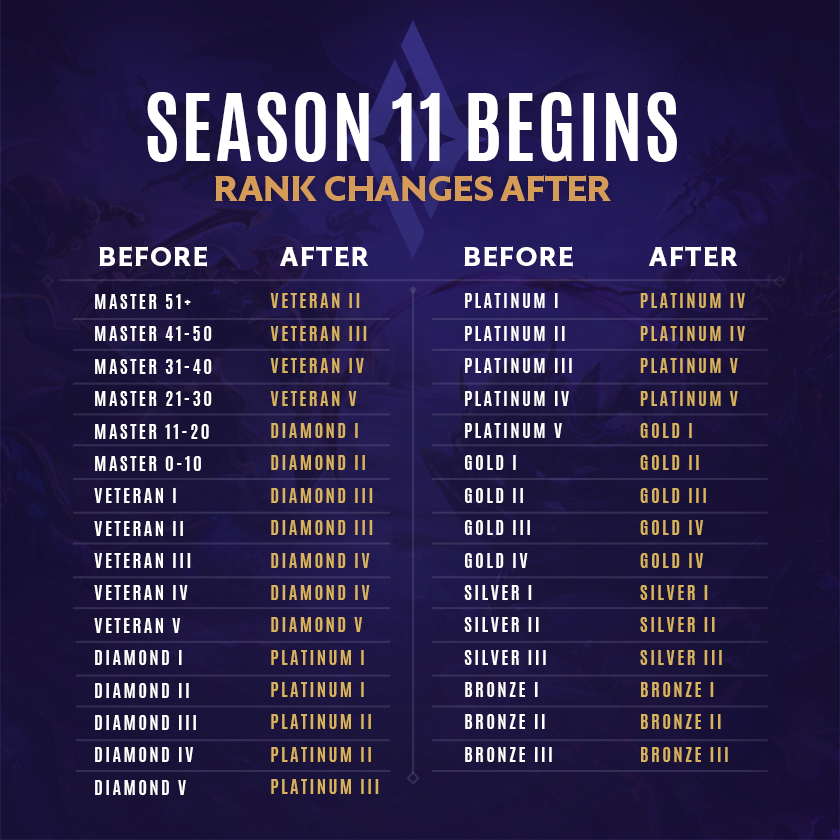 Not only does the Battlefield 3.0 update improve on battlefield visuals, we have also tweaked the layout of blue buff jungle, addressing the issue that it was too easy to invade, resulting in one-sided matches too early in the game, while adding a small monster resource to both side lanes, improving the fairness of resource distribution on the flanks and optimizing the battle experience.

We felt that the blue buff jungle is currently too easy to invade in the early game, resulting in a severe jungling disadvantage to the other side. We have tweaked its layout to increase the advantage to the defender. 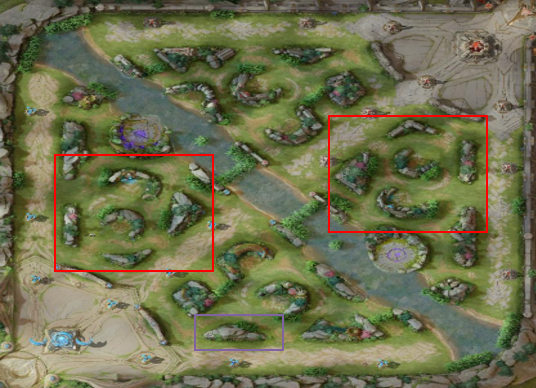 The monster and layout tweaks have been done with an eye towards keeping pacing up to Lv.4 and overall efficiency consistent with pre-update. We're hoping that these changes will improve the overall experience.

The brush area in the red buff jungle near the high ground gives the attacker too much of an advantage and forces the defender to be reactive when defending tower 2 and core tower. We have moved the brush to even things out a little for the two sides.

1.Team EXP for killing Abyssal Dragon reduced by 250 for all stages

4.Removed the 10% income penalty when there is an enemy lane at the outher tower

2.Drake damage vs. tower increased by 20%

Ignis, the Anointed One

[Designer's View] Diaochan has always been a difficult hero to use. The long recoil time affects her survivability and continuous damage output. We have improved the feel of her skill 1 and 2, improving her matchup against other heroes and allowing her to adjust position between skill uses.

With disabling skills becoming increasingly prevalent, Diaochan's ultimate makes her a sitting duck as she is immobile while casting it. Without changing this characteristic, we have given her a shield against skills which reduces the chance of Blizzard being interrupted, while improving survivability against Assassins.

Gain a frost shield if no damage was taken in the past 7 seconds. The shield protects Diaochan the next time she would be dealt damage by a hero, and gives temporary immunity to damage and disabling effects.

[Designer's View] D'Arcy's skill 2 is not sufficiently reliable without his ultimate, while his skill 1 is far too powerful, combining too many useful effects with high damage. We have increased the AOE of his skill 2, increasing its chance to hit, while reducing the protective ability of skill 1 and offsetting it with skill 1 and skill 3 damage.

[Designer's View] In the current high-paced metagame, Tulen's powerful lane-clearing ability gives him far more mobility than other mages, making him a very popular choice in competitive matches for the middle lane. We've increased skill 2's early-game charge time and reduced his passive damage against monsters, limiting his lane-clearing advantages without eliminating them.

Capheny's Life Steal gain is 2/3 that of other Marksman

[Designer's View] We improved Tel’Annas' lane-clearing ability, and moved the speed-up effect to the more frequently used skill 2 to give her more breathing room.

Every third normal attack deals an additional 0.5 AD Physical Damage to the target and nearby enemies, including buildings (0.75AD to monsters and minions). Additional damage may be critical damage.

[Designer's View] Hayate was too effective against lanes, and the blink ability of his skill 2 and ultimate made him too flexible tactically. We have weakened his skill 1 lane-clearing efficiency and ultimate cooldown time to bring his growth rate in line with other heroes.

[Designer's View] In the new update, Valhein's dual-boost benefits considerably more from Enchantments that increase both AD and AP. We have tweaked his base damage to keep his final damage reasonable.

Kahlii, The Aspect of Vengeance

[Designer's View] Like Valhein, 4>Valhein dual-boost benefits considerably more from Enchantments that increase both AD and AP. We have tweaked her base damage to keep her normal attack damage reasonable.

Loses 5%/10% current HP when using a normal attack skill/Ultimate, and recover 6% of HP lost in 3s.

[Designer's View] Arum works a little too well with the "Visceral Boost" Enchantment, allowing her to jungle unchecked at Lv.2. We've balanced her strength throughout the match so that she's more manageable with Visceral Boost without affecting her overall strength.

[Designer's View] Maloch's cooldown has fallen behind the metagame, so we've reduced the cooldown of his skill 2 and 3, and given him a cooldown reduction boost when his ultimate hits a hero.

When an enemy hero is knocked away, refresh Cleave cooldown

[Designer's View] Veres' ultimate had a 10s Enrage effect when it kills a hero, while her passive reduces skill cooldown when hitting a hero. This forces players into a decision as to whether to unleash the ultimate now or to wait for a killable target. We want to encourage players to use the skill more regularly and take advantage of the passive cooldown boost, so we've tweaked the trigger mechanism so that it lasts 6s per hit, plus an additional 2s for every additional hero hit.

Leviathan and Mantle of Ra's Burn effect do not stack

Loki's Curse and Apocalypse's Curse effect do not stack

10. Bug fixes and other improvements

1.Fixed an issue where Fennik's ultimate sometimes did not deal damage

2.Fixed an issue where Veera's skill 1 effect was sometimes not visible from enemy POV

3.Fixed a bug where Enzo's skill 2 could be recast without cooldown when it expires

4.Fixed a bug where Enzo's ultimate passive would be triggered when he reaches Lv.4 and learns his ultimate

5.Fixed a bug with incorrect effect on ranged heroes when using Hercules' Madness

6.Fixed a bug where Veera's skill 1 effect was sometimes not visible from enemy POV

7.Improved the handling of Violet, Toro and Krixi

9.Updated lobby and match effects for Lauriel and other heroes

10.Updated lobby and match models for Valhein and other heroes

11.Fixed an issue where The Flash's ultimate location and damage effect did not match

1.Fixed an issue where a direction could not be selected for Yorn's ultimate when his passive is triggered

2.Fixed a bug where Maloch's skill 1 range would become reduced

6.Fixed some description issues with 10V10 and inconsistency between indicator and actual damage

7.Fixed a bug with Moren's normal attack not refreshing skill 1 buff in 10v10