7 June, 2021 – The Arena of Valor World Cup 2021 (AWC 2021) Group Stage draw results are out! The 16 title hopefuls – composed of the strongest Arena of Valor (AOV) teams from across 9 regions – now know which of their rivals they will need to overcome in the Group Stage in order to advance to the knockout stages. With the teams bursting with talent and the draw having generated a host of exciting match-ups, AOV fans are in for a treat once the AWC 2021 officially commences with the Group Stage next weekend!

The local pro leagues and qualifier rounds were a showcase of each region’s top strategy, skills, and teamwork. Fans can look forward to an even more intense battlefield when the 16 title hopefuls convene at the AWC 2021 Group Stage from 19 to 27 June and test their skills against the world’s greatest. The Group Stage will comprise 4 groups of 4 teams each: 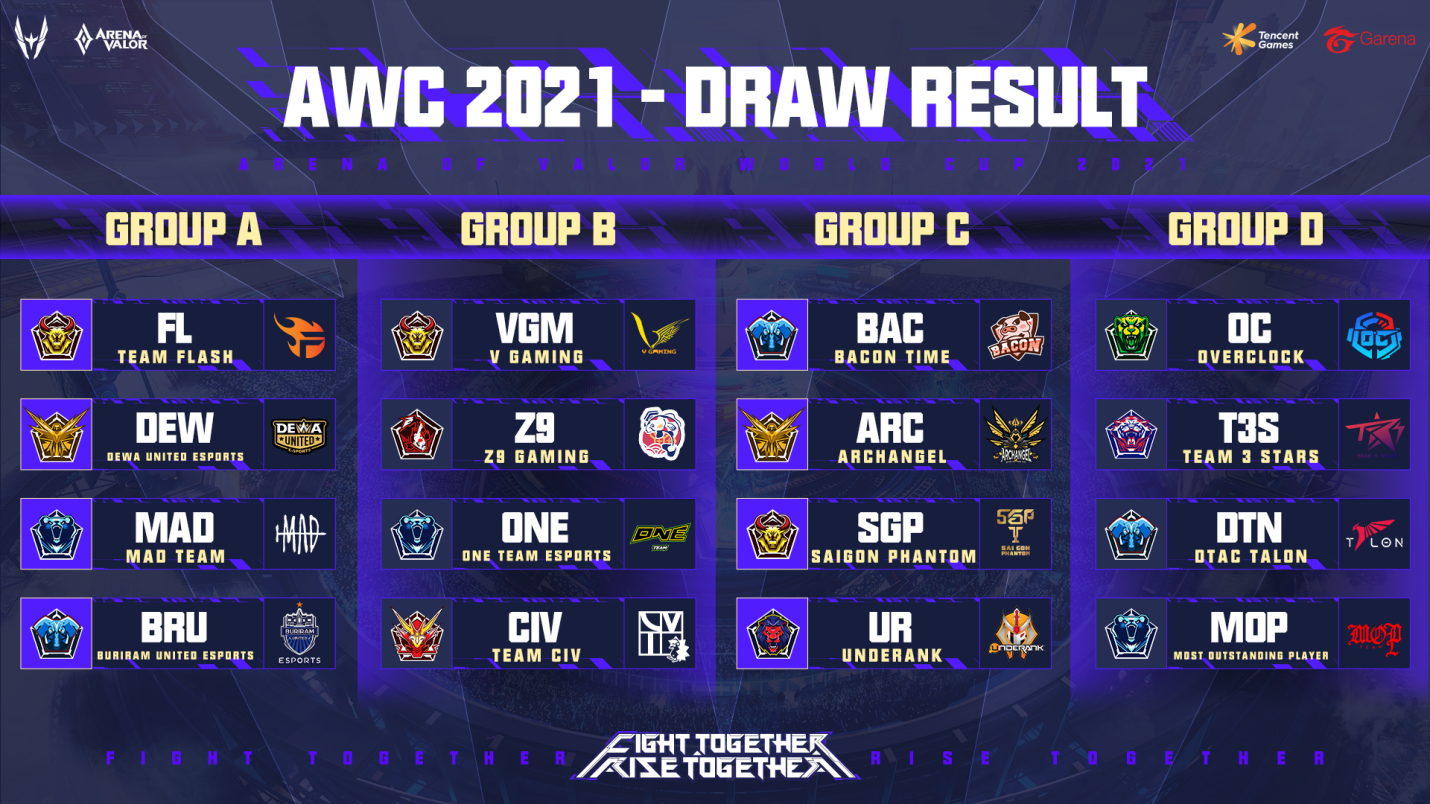 Tournament format: how teams can get to the Grand Finals 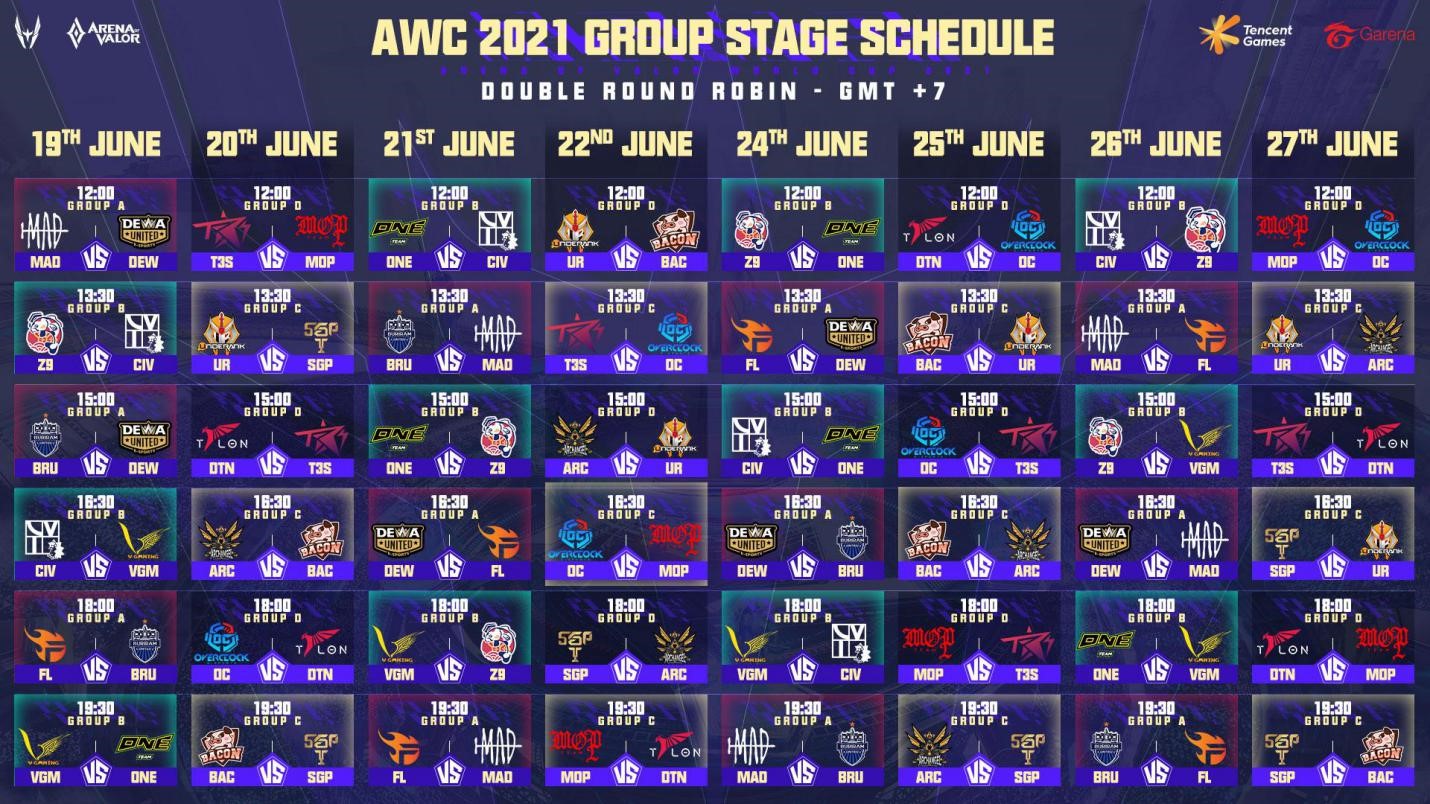 The AWC 2021 Group Stage will comprise 48 matches in total, with all of the matches to be broadcast on 8 dates from 19 to 27 June. The Group Stage matches will be played in a double round robin format, with only the top two teams in each group to advance to the knockout rounds. All matches will be played in a Best-of-2 (BO2) format, in which a result of 2-0 will grant 3 points to the winning team, no points to the losing team, and tying 1-1 will give teams 1 point each. The global ban-pick rule will also be in effect to enhance the strategy and pick diversity for the teams. 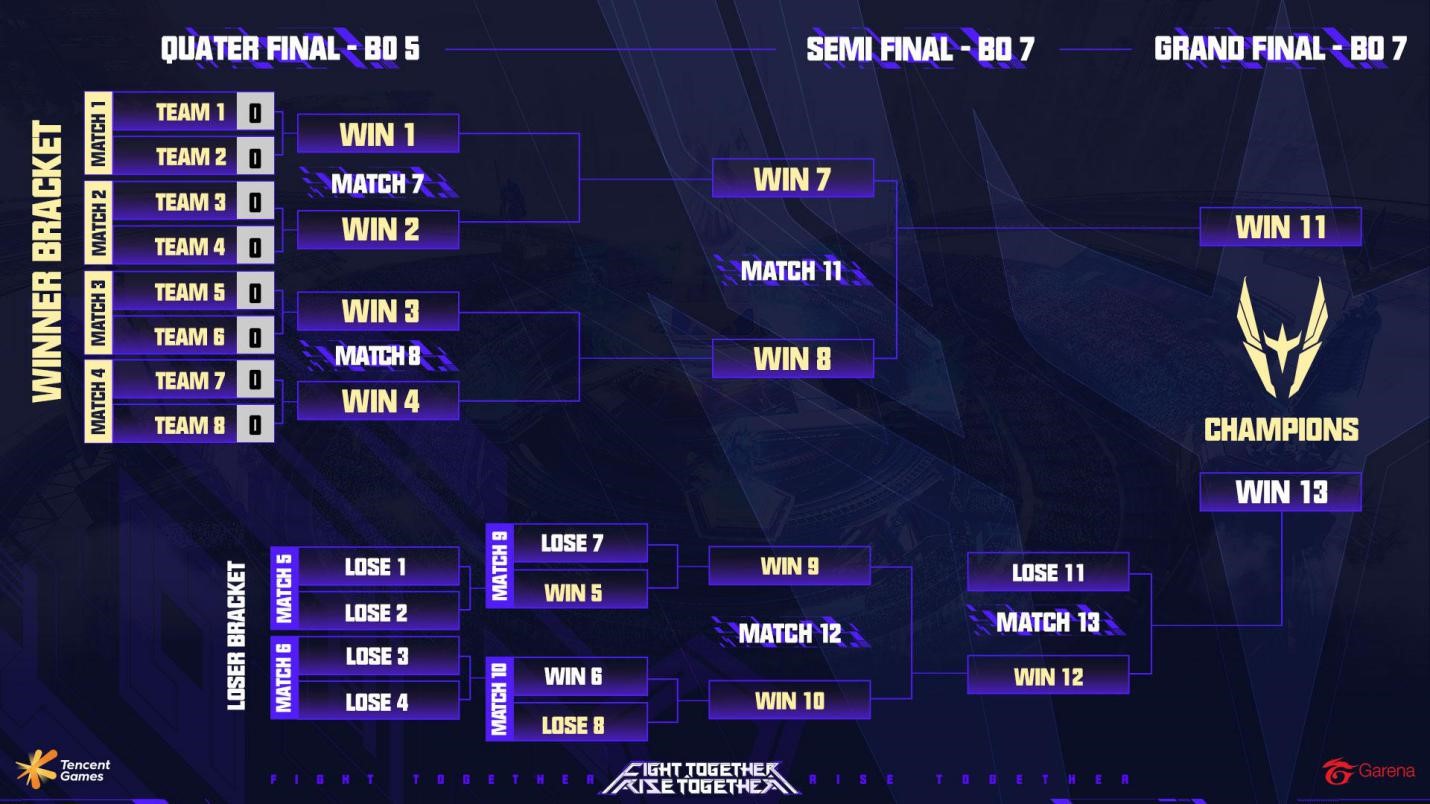 The knockout stages will consist of the Quarterfinals (from 30 June to 4 July) and Semifinals (from 10 July to 11 July). The matches will be played in a double elimination format, in which a team is only knocked out if they are defeated twice. The losing team will drop to the losers’ bracket, where they will play against another team who has also lost once. The first round of the Quarterfinals and first round of the losers bracket will be played in the Best-of-5 (BO5) format. From then on, all remaining matches will follow a Best-of-7 (BO7) format. Two teams will make it through to the Grand Final on 18 July, where the winner will be crowned the World Champion.

The AWC 2021 will also feature a first-time global collaboration with Garena Thailand partners: the Ministry of Tourism and Sports of Thailand (MOTS) and the Sports Authority of Thailand (SAT). As official partners of Garena Thailand, the MOTS and SAT have been vital in their efforts to push and officiate the local esports activity. This global collaboration is a big step for the esports industry to be recognised by a government.

Fans can catch all 48 Group Stage games live via a host of streaming platforms, including Facebook and Youtube. These will be accompanied by local commentary in 5 languages – English, Bahasa Indonesia, Chinese, Thai, and Vietnamese – to cater to AOV’s diverse global fan base. Viewers can also look forward to an exciting and immersive online virtual concept – a first for AWC! 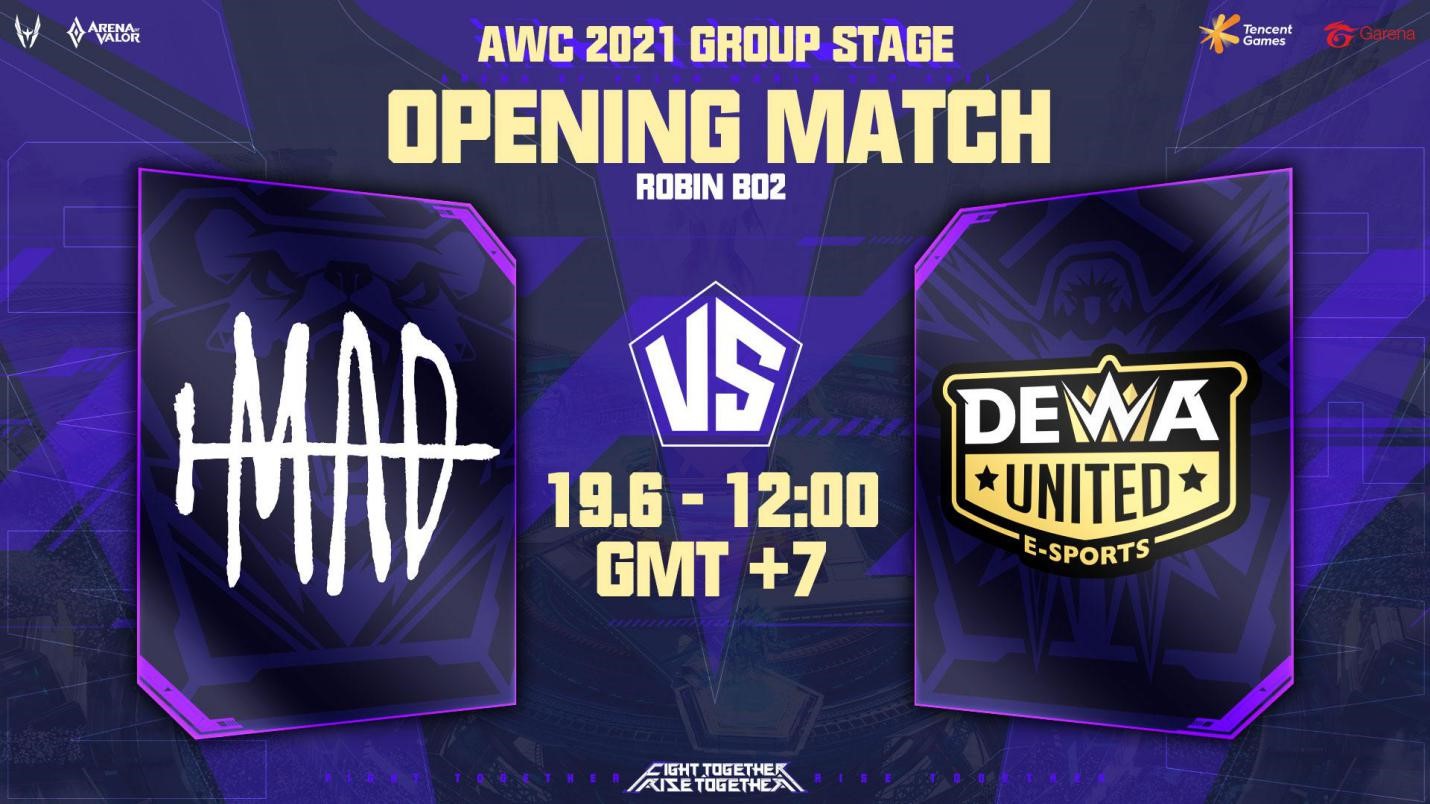 Download AoV on the App Store or on Google Play.

Tencent Games is the world’s largest gaming platform by operating revenue. As the world-class gaming division of Tencent Holdings Limited (SEHK 700), the company develops and publishes AAA products for hundreds of millions of gamers on the world’s most popular platforms. Tencent has built deep strategic partnerships with Epic Games, Riot, Supercell and other top game companies to bring their popular titles to China, the largest game market in the world. Tencent Games is dedicated to creating interactive entertainment experiences that are high in quality, engaging, and fun for a variety of audiences across a multitude of online game products. The company is based in Shenzhen, China, and Palo Alto, California, US.