Arena of Valor is about to be updated with a brand new patch and will include a wealth of changes, including hero balancing, battlefield mechanics, and more! We hope that these changes will bring a more balanced and fun experience for all of our players!

PLEASE NOTE: If you are playing on iOS, you will need to update to iOS version 12.2 in order to continue playing Arena of Valor.

You will now receive a notification when you receive a friend request while browsing the menus, allowing you to accept or decline quickly.

Friend requests will now show where they added you and where they are from, helping you to decide whether to add the person as a friend.

Star changes after each ranked match are now reflected in weekly reports, excluding those in the final placement process.

5.Reduced death time in the first 4 minutes of a match 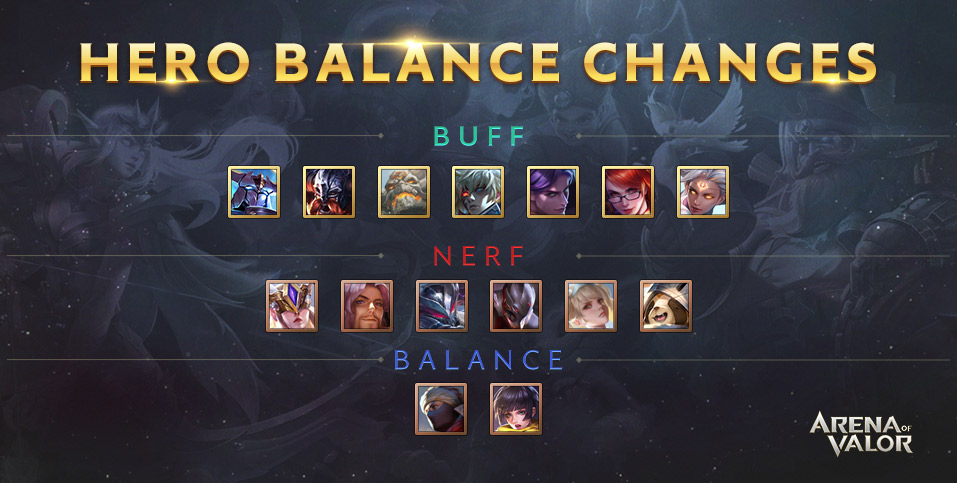 [Balance Team Notes] Fennik's usage and win rate hasn't been where we want it. We're making some tweaks to make him more competitive, and we'll be keeping an eye on how it affects him on the battlefield.

Overall, we want Fennik to stand out more as a ranged assassin, and be more effective dealing damage in the late-game to ensure his value as a damage dealer, and also simply to make him more fun to play. To balance things out, however, he will continue to be a "glass cannon" who's reliant on abilities.

Fennik used to be one of the few ranged heroes with an advantage against monsters, enjoying relatively strong burst damage capability and survivability with his first and second abilities. As the metagame developed, however, these advantages are no longer enough for him to stand out among the crowd.

[Balance Team Notes] The additional damage from Fennik's normal attacks now affect enemy heroes, but trigger less frequently. This ensures that he has an auto attack advantage as a marksman in the late game.

Every third auto attack deals additional physical damage (+0.4 bonus AD) to the target and nearby enemies (including buildings, +75% against monsters and lanes). This damage can crit.

[Balance Team Notes]The early cooldown for Thief's Mark has been reduced, with an eye towards focusing on dealing with a single enemy as well as AOE. While explosion damage is now only triggered at max layers, the addition of stun and blink makes it easier for Fennik to run away or keep up the pressure. In addition, every normal attack against a marked target deals passive additional damage, resulting in more consistent damage output overall.

Fennik marks an enemy (including buildings) for 4 seconds. For the duration of the effect, each normal attack hit against the target triggers the passive [Hidden Weapons] effect and adds an additional Thief's Mark that explodes when it expires, stunning the target for 0.25-1 seconds depending on how many times it was marked. Attack speed is increased by (25/30/35/40/45/50)% for 4 sec.

New: Able to blink a short distance while using this ability.

[Balance Team Notes] Rolling lightning now increases Thief's Mark stacks, and the cooldown is reset if the max number of stacks is reached. In combination with Thief's Mark, this allows Fennik to kill targets more effectively, and get out safely more often.

[Balance Team Notes] Ultimates have a long duration, so damage buffs against the center of the ultimate rarely work the way you want them to. In addition, the Thief's Mark mechanism encourages players to chain into Ability 1, while large-area slow effects are better against large groups—a bit of a contradiction. The change makes the ultimate more of a pure damage skill, which is why it now benefits from crit. Stage 1 and 2 have a recast mechanism to maximize the ultimate's effect, whether for self-defense or to quickly wipe out monsters. As a final touch, we've also improved how Fennik feels overall; you will find that he's more agile and responsive than ever.

[Balance Team Notes] Right now, Ilumia combines long range, high damage, and crowd control. The combination of her second ability, upgraded first ability, and ultimate can lock enemies into a stun loop at range, while dealing heavy damage. We've reduced the disabling effect of the first ability to give her enemies more of a fighting chance.

[Balance Team Notes] We want Ormarr to be more of a focused tank, combining survivability with some degree of damage output. The intention is that he should be a support hero who can help with taking on Slayer. We made a number of tweaks, reducing the first ability’s cooldown, the second ability’s base damage ratio and channeling time, with the aim of increasing his strength in the early and mid-game, and still be able to make a difference with his crowd control ability in the late game.

[Balance Team Notes] The description of Lumburr's Shattered Earth was inconsistent with its actual effect, reducing enemy heroes' ATK rather than Physical Damage. We're making sure its description matches the effect, while keeping its power roughly the same.

[Balance Team Notes] Errol's upgraded Boneshaver is his main damage and crowd control ability, but it leaves him vulnerable and is easily interrupted, often resulting in an untimely death. Upgraded Boneshaver now grants temporary invincibility, which should make him more consistent in the mid to late-game.

When passive skill reaches 5, consume all rage, gain invincibility, +50% damage and healing effect, and knocks enemies into the air for 1 sec.

No immunity while lunging

[Balance Team Notes] We reduced the burst damage of jungling weapons in this version, and among assassins, Quillen is most reliant on burst damage. To minimize the effect of this change on him, we've rolled back some of the nerfs he received in previous patches.

[Balance Team Notes] Fire armor and the passive healing bug have weakened Veres more than we expected in the last patch. We've improved her passive damage and attack boost from her ultimate in order to address this.

Fixed a bug that prevented the ability from hitting close enemies.

[Balance Team Notes] Hayate was a little too good in lane, and the combination of his second ability and ultimate made him more mobile and flexible than we wanted. His first ability is now less effective at clearing lanes, and his ultimate now has a longer cooldown, which should make him a more manageable opponent.

[Balance Team Notes] Violet's first ability was too powerful: it had long range, explosive damage, and was hard to avoid. We've reduced the power of her first ability, but also gave her more ways to reduce its cooldown, making her battles more interactive.

Ability 2: Fire in the Hole

[Unique Passive: Berserk] Life Steal does not work at range

2.Fixed a bug with Omen's Thirst gain from combo attacks

3.Fixed a bug where Amily's second ability doesn't cause knockback when chained with blink

5.Fixed a bug where Hayate's ultimate could not be interrupted manually at certain attack speeds

6.Fixed a bug where Hayate will not continue to move when his ultimate is chained with blink

7.Fixed a big with Riktor's movement when moving between different terrain

8.Fixed a bug with Annette's ultimate that could cause clipping errors with enemies

10.Arum and Aleister's ultimate can now interrupt Iron Body and stop its effects

12.Fixed delays with the follow-up in multi-stage skills of certain heroes (e.g. Murad and Nakroth) where the previous stage could not be interrupted immediately